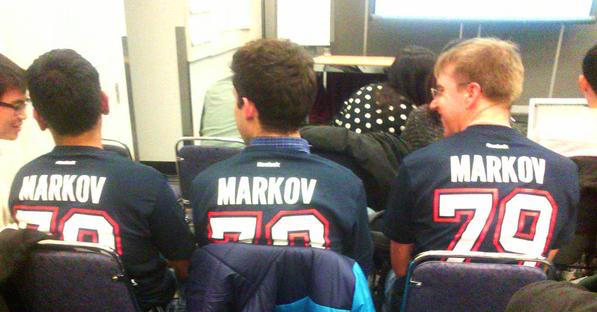 Design and implement functions that build an order K Markov model from a piece of input text. Markov models are popular tools in speech recognition, handwriting recognition, information retrieval, and data compression. For this assignment, you will consider a different application: generating stylized pseudo-random text.

Part 0: Markov model. Create a data type Markov to represent a K-character substring. Ultimately, it will have a method random that returns a random character according to the Markov model. For now, just make it store the substring and an integer that counts the number of times the substring appears. You will need a constructor, a method to increment the frequency count, and the usual toString method for output.

Part 1: frequency counts. Implement a client program FrequencyCounter.java that reads the order parameter K of the Markov model from the command-line, a text string from standard input, and uses a symbol table to insert each K-character substring (key) from the text. For example, if K is 2 and the input string is “agggcagcgggcg”, then your client program should create Markov objects for each of the 5 distinct keys, and call the add method 12 times in total: ag gg gg gc ca ag gc cg gg gg gc cg. Maintain an integer count of the number of occurrences of each key. Use your symbol table’s methods to print out the number of distinct keys and the number of times each key appears in the text. For the example above, your program should output:

Part 2: language model. To generate random text, given a K-character key, your data type Markov must know all of the letters that follow the K-character key. This operation is at the crux of the matter, as you will need it to generate random characters in accordance with the Markov model. Modify your Markov data type so that in addition to the frequency counts, it records the breakdown depending on the next letter. Create your own linked list to keep track of the list of suffix characters along with their frequencies. Modify the toString method so that it it prints out the list of suffixes, along with the substring and the frequency count. Include the following method to insert a suffix character.

Modify FrequencyCounter.java to create a program LanguageModeler.java that inserts keys into the symbol table (if necessary), and calls add(char c) to add the appropriate suffix characters to the Markov model. It should produce the following output on the example input.

To make things look pretty, convert all whitespace characters into spaces or underscores. Note that since the last cg substring doesn’t have a “next” character, we don’t include it in the model.

Part 3: pseudo-random text generation. Add a method random to Markov that and returns a pseudo-random character according to the language model. Be sure to get the probabilities right, as we will be checking this.

Now, write a program TextGenerator.java that takes a command line input K, a command line input M, reads in a text string from standard input, and prints out M characters according to the order K Markov model. Start by printing the first K characters of the original text. Then, repeatedly generate successive pseudo-random characters. Using the example above, if the Markov object m represents the substring “gg”, then m.random() should return c or g, each with probability 1/2. After you generate a character, move over one character position, always using the last K characters generated to determine the probabilities for the next. For example, if your program chooses c in the example above, then the next Markov object would represent the substring “gc”, and according to the Markov model, the next character should be a with probability 1/3 and g with probability 2/3. Continue the process until you have output M characters. If the language model contains less than 100 K-tuples (prefixes), then print the language model (as in the program LanguageModeler.java) before you output the M randomly generated characters.

Submit your code (TextGenerator.java, LanguageModeler.java, Markov.java), along with one or two of the most amusing language-modeling examples that you come up with. Describe your data structure and algorithms in detail, and analyze the most important performance characteristics of your program in the memo.txt file. Discuss how your choice of k impacts the resulting text.